TALLINN was the stop I was most looking forward to on our cruise. I was expecting it to be a fairytale-pretty little city with quirky streets and squares to wander around.

It turned out to be exactly that … But so much colder than I anticipated!

The old town is a UNESCO World Heritage Site, but the city itself is in the top 10 digital cities in the world … so it’s really a capital of extremes, and it’s clear when you overlook the city from the old town and see the tower blocks of the business district.

As we only had a day there, we only saw the old town, but I think that’s the area most tourists would stick to anyway.

Just off the bus we spotted our first photo opportunity … One of my favourites from the holiday!

Our first stop was Town Hall Square, where we made sure we got our capital city challenge flag photo before Santi fell asleep in the pram, as was becoming his habit on shore.

Within a day of getting on board the cruise, Santi learned to point – something to do with the abundance of clocks we seemed to come across – so wherever we went involved a lot of pointing at people, birds, clocks, anything really … and all encouraged by grampa!

He also made his first little girlfriend! How cute is she…

We then walked up to the Alexander Nevsky Cathedral, a beautiful onion domed building, which was exactly what I expected from Estonia (and as expected from Santi, he was almost asleep by this point … sightseeing really isn’t his thing). We had a quick walk around the outside and then popped inside for a look.

Another cathedral, this time St Mary’s, was just around the corner along a little cobbled street. It was pretty cold, so there was no hanging around on this stop, just take a photo and move on!

Being so cold, there was time for one more stop before heading for a hot chocolate. We were a little bit stingy on buying food out as there was so much choice on board the ship and keeping Santi out for more than a few hours got a bit tiring, so we headed back to eat on most stops. Anyway, Stew was very keen to see Kiek in de Kok (not just because of the name, I’m sure…), so that was next on the list to be ticked off. I don’t think we actually got a photo of it, but we did get one of Pikk Herman, a tower from which the national anthem is played every morning at sunrise.

As I mentioned, hot chocolate was a must to warm up and it was one of those amazing ones you tend to get in Europe … basically melted chocolate in a mug, none of our powdered nonsense. Stew somehow didn’t like his, so I had double the goodness!

At this point we split up so Stew and my father could go somewhere (I can’t remember what they were looking for), while me and my mother popped into a few shops. We headed to a toy shop I’d spotted on the walk in to the old town, so I could pick up a little wooden camera for Santi. We posted a postcard home – we did this from every city for Santi – and then discovered an amazing shop called Lindex with lovely and very reasonably priced baby clothes. Despite the cold, I picked up a pair of pineapple shorts for Santi, which were my favourites over the summer, and a pair of black joggers with wild on the back.

After changing Santi in a cellar in Stockholm, Tallinn’s nappy change was the complete opposite in the toilets of a rooftop cafe! I think baby changing facilities were the only thing I could fault a lot of the cities we visited on … they really don’t cater well for it and I don’t think we once used a changing table as we just didn’t find one!

And that was it to Tallinn, we headed back to the ship to warm up and have something to eat (and a drink for Boofle, who was worn out after another city!). It was a lovely place, but a bit too cold to hang around and take everything in properly. Maybe we should plan another visit for the summer … oh wait, it was mid-June! 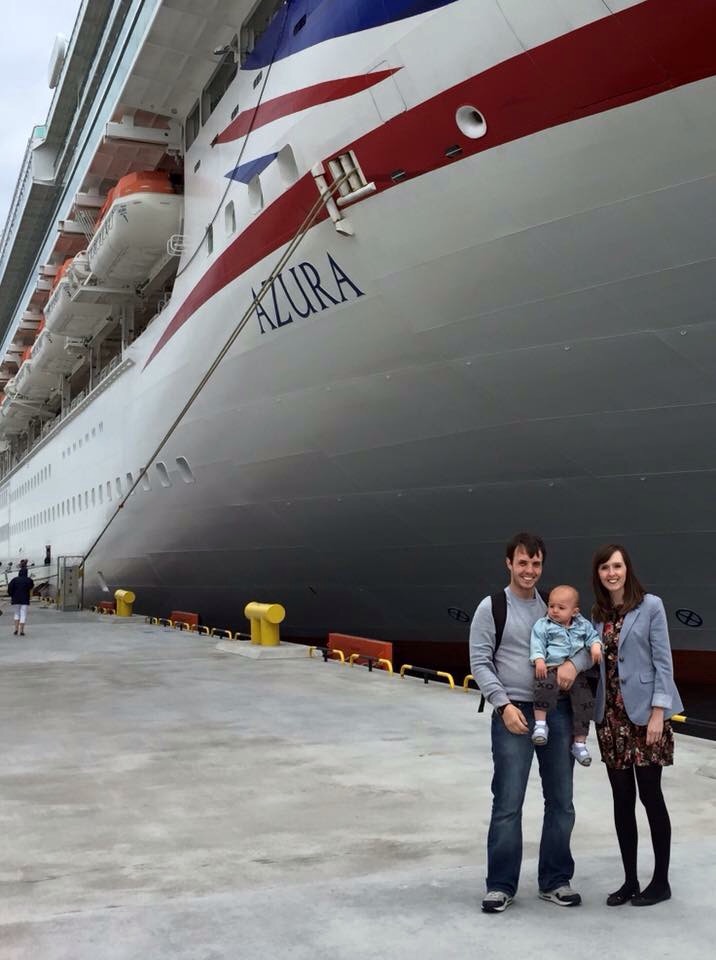