I’VE finally given in. After months of determined “we don’t need a playroom” arguments, we have a playroom.

We didn’t really need one, we had a perfectly good toy corner (you know the sort, don’t go near the teetering tower of stuff if you value your life), then Christmas came along and it became impossible to walk through the living room without standing on a car or wooden train track.

So, half way through January I gave in and started googling playroom ideas. And on a whim one Sunday morning we decided enough was enough, headed to Ikea, bought half the shop and got to work.

Just for some background on the room so far, when we moved in there was a grotty carpet, which we ripped up to sand the floorboards and paint them white, and awful velvety curtains, which did come in handy when we turned the water supply on for the first time and the radiator became a fountain.

We painted over the delightful peach wallpaper with navy on one wall and pale grey on the other three. Then, after a couple of years turned the chimney breast into a feature wall with wood-effect paper. Fortunately, to turn it into a playroom there was no need to completely decorate what was, for a while, the grandly named – and much unused – nautical room.

And here it is under its new guise of the playroom! Apologies for the faded looking photos – the light wasn’t great, but I had to go for it as there’s no way the room will ever be tidy enough to photograph again! 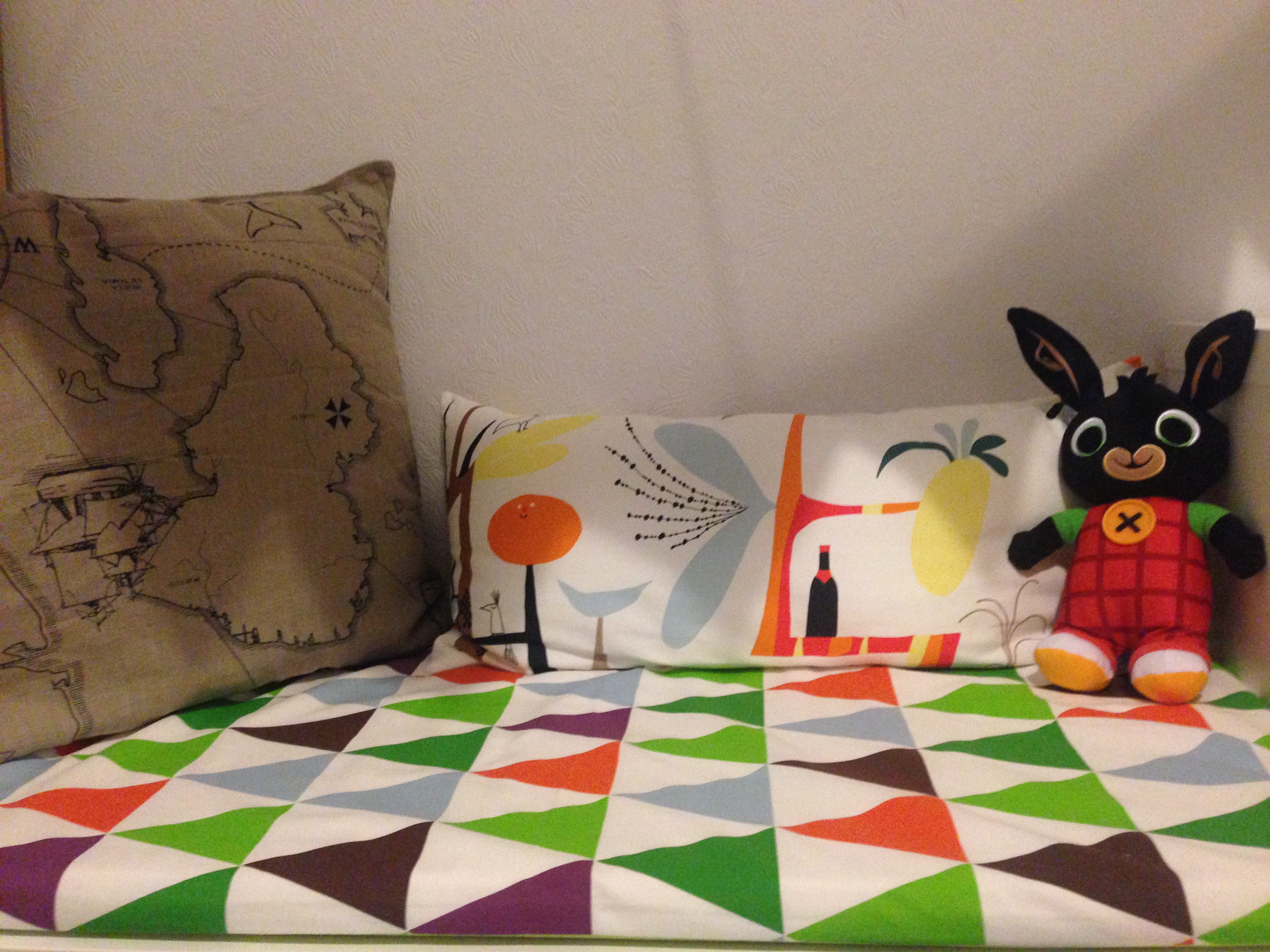 This wall is my favourite part. The storage units are from the Ikea Kallax range and we’d intended to buy a different type for the middle and have a seat cushion made, but then we spotted the bench and storage box with a triangle patterned seat pad, which was much easier. The canopy was bought on a whim (does anyone stick to their list in Ikea?!) and was a lot, lot bigger than I expected – but it’s a lovely little reading area now and feels a bit like a circus tent.

As much as I love monochrome, and I did consider a black and white theme, we decided to be bold and I love the bright colours of the cube boxes against the white.

On the left-hand wall we have more much-needed storage. It’s great that you can slot the boxes in to hide the plastic stuff and have the nice toys on display!

In the alcove we have an old library filing cabinet, which is perfect for shoving things in that don’t have a home. I framed some of my favourite recent photos to display on top and we’ve kept a hint of the nautical theme with some life rings my parents bought on cruises years ago and a wooden seagull.

Santi’s teepee is no longer taking up half of the room, and now lives in the opposite alcove. I’m hoping to buy some big cushions to go inside to make it a bit cosier. Since sorting the room out Santi has rediscovered the teepee and loves going in to hide now. We bought a little grey table without really knowing what it would be used for, and it’s the perfect fit for the “motorway’ set we bought for Christmas, which was a complete bargain and came with loads of extra bits we didn’t know about, including a battery-operated tram. I’ve seen a lot of people creating Lego tables by gluing base boards to the top so they can’t slide around. I used up some of the spares from the letter banner set we bought for Santi’s room to write a Dr Seuss quote on the wall. I love this one, and we actually had the first part (Oh, the places you’ll go) as one of the readings at our wedding.

So those are the main features and the big bits that we bought, and here are a couple of details dotted around the room.


So that’s our playroom – not bad for a morning in Ikea and a lot of shuffling things around! I feel as if the room has a purpose now instead of being a wasted space, and I keep peeping in for a look when I walk past!

I’d love to know what you think of it … why not leave a comment below or over on Facebook?

11 thoughts on “A brightly decorated playroom with plenty of storage”